How long does it take to master a recipe?

Welcome to the finale of “The Julia Child Challenge”, a very silly and generous show that had me rolling my eyes and about even tears. There are three candidates left: Bill, the smart and stylish cookware distributor who lives in my corner of the country and should probably invite me to dinner; Dustin, the enterprising fitness instructor; and Jaíne, who is quite simply the most charming woman alive and – as one of the other challengers called her in a previous episode – a near-incarnation of Julia in terms of wit and presence. Only more tearful. Julia wasn’t much of a screamer, from what I can tell.

Speaking of tears, there are going to be some here today – fair warning.

Our three contestants start by watching a “French Chef” clip in which Julia Child, referring to the intimidation factor linked to caramelization (fear is real!), names “the awful American fear of failure syndrome” . I don’t know why it makes me cry. I think I may have felt a little too seen? Julia does this to me.

Dorie Greenspan is the guest judge! After quite a few TV chefs and cooking show stars, we’re back on my beloved turf, and I may be crying a little more. The other judge is Brooke Williamson, who I don’t know, but she seems nice.

The first challenge is to take a croque monsieur – a classic fried ham and cheese sandwich – and turn it into an upscale starter. I have to say that while this show has at times tested credulity with its connections to Julia’s life and legacy, the challenges themselves mostly make sense. But people have problems. . .

Dustin comes up with the idea of ​​making a Vietnamese croque monsieur, which makes sense. One way to do this would be to go with a banh mi, but he intends to make rice flour pancakes. Pancakes, however, look bad in front of TV cameras. When they’re not working, he changes plans and makes a nice simple croque monsieur with herbal Vietnamese touches – cilantro, basil, etc.

RELATED: Omelettes Are Hard to Master & More Lessons From ‘The Julia Child Challenge’

Bill wants to make a curly salad with croque monsieur croutons, a twist on the traditional croque monsieur served with a side salad. I would like to eat this now, although I wonder if the croutons are enough to get the croque-ness down?

Well, it turns out it doesn’t matter. Bill’s sandwiches aren’t frozen enough to be fried into croutons in time, so he has to make a decision during the game and change his plans. He fry them in what looks like mozzarella sticks. I wouldn’t throw them out of bed.

This Brooke judge wanders around to break people’s concentration. It’s his job, but it pisses me off.

“I remember just standing there, letting it soak in right after I finished the Julie/Julia project. It’s corny as hell, but it was a big moment for me.”

As the final three cooks, new footage is released, including a snapshot of Jaíne and her boyfriend in Julia’s kitchen at the Smithsonian. I cried the first time I watched it, and I still cry now. I’m almost 50, heart cold and dead, but this kitchen still gets me. I remember standing there letting it soak right after I finished the Julie/Julia project. It’s cheesy as hell, but it was a big moment for me.

Dustin and Bill both struggle with this first challenge. Neither attempt ends as high as hoped. Dorie thinks Dustin’s sandwich is way too much for a first course, while Chief Judge Antonia Lofaso (“Top Chef”) compares Bill’s buns to the aforementioned mozzarella sticks. (I don’t know what people think is wrong with mozzarella sticks, but OK.) Only Jaíne navigates. Her dish looks elegant and delicious – and all the judges love it.

Before being given their next challenge, Jacques Pépin makes a video appearance. Awww, man. His relationship with Julia breaks my heart in two. Anyone who’s had their fill of “The French Chef” should upgrade to “Julia and Jacques Cooking at Home.”

Crikey, so this last challenge is a doozy. They must prepare a three-course meal, complete with duck à l’orange, beef bourguignon, and croquembouche (which is a stack of cream puffs drizzled with caramel and covered in spun sugar). In three hours. This is, in my opinion, technically impossible.

Dustin continues his Vietnamese theme with an orange duck pho, which makes perfect sense in the world. He roasts marrow bones, makes rib marmalade (I don’t know what that is!) and braises ribs for a sort of “Bourguignon Three Ways” concept. His dessert is a Paris-brest, which he calls a kind of French beignet, with lime curd.

Jaíne turns once again to her native Brazil, making plantain gnocchi, pan-fried in duck fat with crackers and orange sauce. She’s going to make her Burgundian ropa vieja, grated with rice and beans. She bunts a bit on the dessert, making what she calls “croquembouche pancakes”. So, no cream puffs. She simply works with the orange and cream profile. 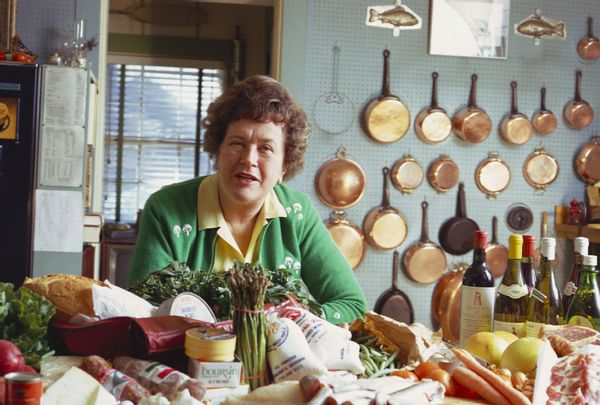 Julia Child poses in her kitchen, Cambridge, Massachusetts, 1972. (Hans Namuth/History of Photography Scholars/Getty Images)The cooks must present their first dishes and then return to the kitchen. All are doing well, although there are concerns that the duck won’t pass on Jaíne’s gnocchi.

Let’s move on to the beef bourguignon. As they cook, another “French Chef” clip plays, in which Julia complains about the grocery store stew meat, which is cut too small. “It looks like cat food, and I don’t like it.” I start crying again. I do not know why. Somehow, I feel like I’m saying goodbye to her once again.

Jaíne managed to burn his meat. Oh no, Jane! Everyone is rushing because it’s a crazy thing to ask people to do. Dustin urges everyone to “breathe, get organized and move on”. For the record, that’s why I’m not doing spin class – I would totally have a misdemeanor assault charge now.

In the end, Jaíne somehow manages to save her beef – and the judges love it. Dustin’s fancy-dan three-way bourguignon lacks the vinous sauce that defines the stew. Dorie says the marmalade isn’t really marmalade, but since I never knew what a short rib marmalade was, I don’t feel any loss. Bill’s sauce is fantastic, even if his concept isn’t incredibly remarkable.

“Once in a while, there’s a little justice in this world.”

The dessert stage scares everyone – and me with them. But then they can finally sit down and relax. The judges love all of their dishes, what a man, thank you, is already giving them a fucking break.

Jaíne wins, and she goes to Paris because once in a while there is justice in this world.

I’ve been here too long, but I have to give in to my emotions here for a second. The contestants and the judges spoke during this short season where they heard Julia’s voice in their head, which of course was the starting point for my blog and my book. Watching this woke up that voice for me, much to my dismay. I never liked sharing it. No real Julia-head does. So to recap that was a bit difficult. But it’s worth remembering that underneath the dumb exploits of the companies there is a real connection. Jaíne feels it, and I guess my cold, dead heart still feels it too.

Throwback to “The Julia Child Challenge”:

Eggs and mayonnaise are an underrated French bistro dish

Get free how-to tutorials and over 700+ courses. Seo tips, create a wordpress, or learn a new skill.
[mc4wp_form]