Hello, this is Julie, your friendly neighborhood picker. Together we will dive into “The Julia Child Challenge”.

Because this won’t be a bitter or petty comment, I should probably eliminate the bitter pettiness from the start. I admit that I feel more than a little possessive of my small role in the story of Julia Child. “Mastering the Art of French Cooking” did, after all, hit the bestseller list for the first time in decades after my book, “Julie and Julia,” came out in 2005. (Of course, Julia got an even bigger boost after Nora’s Ephron movie came out in 2009.)

So, am I a little resentful? Sure. Is this cooking contest engaging in exploitation and trampling? Absoutely. But that’s not why I’m here – so we’ll put it all behind us, the past will be the past and all that.

“Is this cooking contest engaging in exploitation and trampling? Absolutely.”

Unlike a Gordon Ramsey kill-fest, “The Julia Child Challenge” is a show very close to “The Great British Bake Off” or “Making It.” Everyone is extremely happy to be here and support their fellow home chefs. Also, some of the applicants have day jobs that make me feel like I’m 82. Dustin H. is a fitness instructor, who looks the part – I mean day. Christine is a Marketing Consultant, Britt Social Media Manager. Fabrizio, the youngest of the bunch at 24, is a “TikTok creator,” and honestly, I don’t quite know what that is. . . Like I said, 82.

All of the contestants are introduced to their new culinary digs, a rather twee version of Julia’s famous kitchen (you know, the one in the Smithsonian Museum). Everything is robin’s egg blue, and there are pots and pans hanging from pegboards on every wall. Everyone is delighted. Suspiciously fascinated. (OK, I’m going to stop now, for real.) They start looking at pictures of Julia – and I start crying.

My emotions are complicated. Also, I’m pre-menopausal. Give me a little break.

Our judge is “Top Chef” veteran Antonia Lofaso. Each week, she is accompanied by two different guest judges. In episode 1, we have Francis Lam and Michael Voltaggio to help introduce the first challenge: sole meunière.

“My emotions are complicated. Plus, I’m pre-menopausal. Give me a little break.”

Now, the Julia-heads know that sole meunière is the first dish that Julia ate with her husband Paul when they arrived together in France. It’s meticulously filleted sole (which is really fun to make, by the way), lightly coated in flour and sautéed in butter with lemon and parsley. Simple. Each of the candidates is invited to make their take.

Most cooks go for the classic, which seems like the right choice. Some people, however, take a more ambitious route. Jaíne, a tall and smiling Brazilian girl that I already really like, decides to make quenelles of sole meunière, a kind of poached fish mousse ball, which worries me. Christine garnishes her fish with roasted grapes in simple syrup, which worries me too. Elena, who I also immediately adore, wants to serve gnocchi with hers but is running out of time. Fabrizio’s decision to add browned butter chorizo ​​seems really smart.

Meanwhile, my heart breaks for Dustin R. He’s deeply phobic of fish, to the point that he has to cover their little heads with a towel before decomposing them. This lovable man hosts elaborate dinner parties for his friends (which apparently are as much about the costumes as the food, according to his backstory). I suspect he usually has more time to put everything together because time management proves to be problematic. He had planned to dress his fried meunière meticulously with aioli, but he has run out of time.

The first round judging is now complete. The judges are so nice that I almost feel like a Simon Cowell or a Paul Hollywood. Almost, but not quite. Bill, Dustin H. and Fabrizio come out on top, which makes sense – they took smart but not crazy risks.

Next, we have “The Dish That Changed Your Life”. In other words, what made you decide to become a cook?

“This show is heavy on corn, that to some extent I can fall behind. Who doesn’t love crying in the afternoon with Julia Child music videos? But it’s a lot.”

This show is heavy on corn, that to some extent I can fall behind. Who doesn’t love crying in the afternoon with Julia Child music videos? But it’s a lot.

Then, everyone must compose a meal from several ingredients apparently chosen at random: oysters, shallots, fromage blanc, red wine and baguettes. I mean, of course.

Many contestants get nostalgic with comfort food. A few go nuts. Dustin H. makes charred octopus with coffee-rubbed fried oysters. I mean what?! Bill prepares a duck breast with an oyster “snail”.

They both kill him, as does Fabrice, who quickly wins my heart despite my reverse ageism. Dustin R., bless his beautiful soul, came out, based on time management alone.

Episode 2 continues the schmaltz. Coq au vin, a sentimental favorite, is the first course. Susan Feniger and Molly Baz are the guest judges this week. Fabrizio has never decomposed a chicken before. Seeing Molly standing over him while he tries to do it makes me very nervous, especially since he clearly has a crush on her.

“We’ve never seen anyone get cut, but I’ve seen at least four cooks with bright blue finger cots…and it freaks me out.”

Can we talk, BTW, about finger cots? We never see anyone get cut, but I’ve seen at least four cooks with bright blue finger cots – often more than one – and it freaks me out. Also, there have been several grease fires – but no one seems the least bit bothered.

Also, in BTW, Elena begins an interview by saying that there’s no way anyone is confident enough at this point in the competition to think they can win. Then she says, “Well, Dustin H. might.” It’s a shadow that I can get behind. The guy is handsome and he has talent, but man, the ego. . .

It’s fascinating to watch who goes classic with this signature French dish and who doesn’t. We’re starting to get a feel for the characters here. Fabrizio, who is the only one to choose white wine, brings ginger, green onions and umami notes of anchovies and miso. Bill makes the smart and simple choice of replacing the bacon with andouille sausage and spicing it up. Dustin H. can go crazy with his coq au vin ravioli, as well as Elena with her coq au vin burrito. 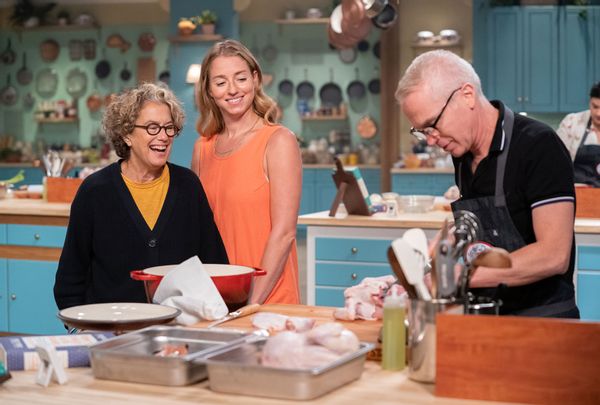 Guest judges Susan Feniger and Molly Baz check out contestant Bill Borman during the first challenge, as seen on “The Julia Child Challenge.” (Photo courtesy of Food Network/Discovery)We are then treated to a clip of Julia flambéing her own coq au vin with cognac. “I don’t know if it does much other than make people feel good.” Again, I start crying again. ‘Excuse me.

“Judge Molly Baz, whom I vaguely distrust, thinks those two things are delicious separately but too much together. I’m inclined to disagree.”

We’re just going to continue the aqueduct here because the second challenge is to make a recipe that represents a particular relationship. The requirement? It must include wine.

Everyone cooks for a family member or partner. Dustin H. says he cooks for his girlfriend Sarah “on-again-off-again, it’s complicated”, which is deeply suspicious. Judge Susan Feniger aptly replies, “We need to talk to Sarah.” It pairs French onion soup with sherry, which is classic Julia, alongside a grilled cheese sandwich with bacon and apple pear chutney. Judge Molly Baz, whom I vaguely distrust, thinks these two things are delicious separately but too much together. I am inclined to disagree.

Fabrizio’s “drowned sandwich”, or tortas ahogados, looks amazing. He replaces the cola in which his family traditionally braised meat with reisling. Plus, he’s using a pressure cooker for the first time in his life. “All I’ve heard about pressure cookers is that they’re terrifying and can explode.” He finally decides that “this pressure cooker is like my grandmother”, just take a step back and trust. This child.

“I love that this show is so sweet. I wonder about the mystique around Julia.”

I know Britt gets in trouble when there’s less than 15 minutes left, but she hasn’t started frying her chicken yet. I’m southern enough to know that’s a problem. Indeed, she and Christine have serious problems with their cooks. Christine is out, while Britt is saved by her excellent first meal.

I love that this show is so sweet. I wonder about the mystique around Julia. She changed my whole life and I love her, but so many competitors quote her saying that mistakes are good and part of the process. True, but Julia was also a maniac – and that’s a competition. There is a love aspect here that I am sensitive to but also a little wary of. . .

“The Julia Child Challenge” airs Mondays at 9 p.m. EST/8 p.m. CST on The Food Network; it is also available to stream on Discovery+.

Eggs and mayonnaise are an underrated French bistro dish

Get free how-to tutorials and over 700+ courses. Seo tips, create a wordpress, or learn a new skill.
[mc4wp_form]